Partition of Resistance against Granada took on CBS Labs Pura Vida – after the team had a rethink which saw their training remodelled.  Colombero between the posts ; Betti , Nicholas and Carezana in in defence ; Romanisio universal Triarico , Bo and Galatians forward. In numerical advantage in the first 10 minutes (one of the players of the Lab was late ). The thrilled player/manager  Fabrizio Zecchi, explained the action: ” After only two minutes, a corner is handled by a defender of Lab, and the blatant penalty coolly converted by Francesco Galati.

The ball is moving like lightning in the centre towards the goal: Fabrizio Bo catches the ball just outside the box and bags another. A few minutes more, and here’s the third important goal Colombero raises, and finds the head of  the veteran Emilio Romanisio that just before the keeper made no mistake. Result in the safe was made safe.” The first half ended with a penalty of Triarico that hit the post.

In the second half , the Lab holds the territorial supremacy but it is dangerous only a couple of times before Colombero to repel flies a hit without fail , then a back-heel Agnes bounces on the pole but the opportunity to incredibly fades into the empty net . As Zecchi explains: “We added some extra bite on the wing but we managed, to score the fourth goal on a free kick shot by half of the field from Galati, as the goalkeeper miscalculated his dive.”

It soon becomes 5-0: “the culmination of the action developed on the left and closed with timely inclusion in the centre area at the invitation which Triarico gobbled up,” smiled Zecchi .

On the sports ground in Orbassano, Fabrizio Zecchi had the luxury of being able to choose two goalkeepers, thanks to the return of Michael Nicholas returned from a forced stay of four months to hand injury, but eight men’s movement counted: Carezana , the two Zecchi ( Albert and Fabrizio) and Nicholas, defenders  Galati, Triarico and De Silva in midfield , Pellegrini in middle . The hosts reply with Buonemani between the posts; Candigliota , Anzoletti and Carfora in defence ; Mister Fabozzi , and Sergio Fish in midfield ; Sblendorio Senator ain attack.

After only one minute of play, Claudio hits Triarico having received a ball from the left and the square edge of the pitch. The second goal was missed be a whisker, before the attack takes the game away from the opposition for a fateful five minutes. A mistake on the left-hand side gives the ball to Andrea Nicholas Sblendorio , then a blunder by De Silva allowed Emilio Candigliota to score, and finally a raid on left projecting again Sblendorio network . 3 to 1 for Sporting , the great veteran Fabrizio Zecchi goes to prop up the rear, and the storm subsides . The grenade react , hitting the post and the defence was stabilized : so the trio of playmakers formed by De Silva , Galati and Triarico were able to do their work in peace and set up Alessio Pellegrini, who scored a brace meaning the score was levelled.

Nicholas closed the half with a dip made from jaguar foiling razing the left post, then give the gloves to Mauro Colombero. In the second half of the grenade, very astutely, play reinstatement: three times, with the Pilgrims, Galati and Triarico , the ball almost dance in the network, the other two times is the keeper of Sporting to do wonders. Ten minutes from the end Fabio De Silva redeems the error which had led to the second goal opponent, rolling under the crossbar from a free kick in the manual. At this point, about 4 to 3 for the grenade , the brothers Zecchi , who form a formidable partnership stampigliano to the dangerous duty Sblendorio , exchanging positions in the center and right , while Carezana ( psychologist with the passion of football and that the helps to read the minds of opponents) supervises the left wing and sets the restart. Last shiver just moments from the final whistle, when Triarico in late fall and Sporting missed the goal by centimetres, meaning their dream was alive. 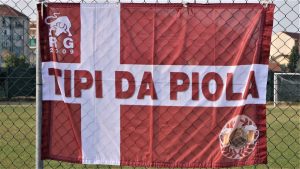